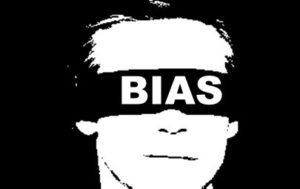 We all have bias. It’s just part of being human. What’s important is that we are aware of our bias and that we try to make sure that it doesn’t negatively impact our actions or decisions.

Years ago, while attending classes at a local university, I met a young man that opened my eyes to one of my unknown biases.  The university environment was filled with students of every background, age, race, sexual orientation and ethnicity.  I always considered myself to be open-minded and accepting of all types of people so the environment felt comfortable.  I didn’t realize at the time that I was not as open-minded as I thought.

On the first day of my Organizational Development class a young man draped in chains, leather and a spiked collar took the seat next to me.  His name was John.  I found myself thinking that he was a bit “out there”.  It wasn’t until after our 1st exam, when I found out that he had scored the highest grade in the class, that I realized  I had not considered him a serious student because of his appearance.  Soon after that I had the opportunity to work with John on a project where we got to know each other a little better.  Over the semester we became friends and I came to appreciate his wit, talent and yes, his spiked collar.  The experience highlighted the fact that we all have bias that we don’t know about.  It also reinforced the old saying, we should never judge a book by it’s cover.

Bias can take many forms.  HR.com defines bias as “a subjective preference toward a particular viewpoint or belief that prevents a person from maintaining objectivity”.  People tend to have bias toward people who are similar to themselves. Most people are blind to their bias, not realizing their tendency to favor someone that looks like them, acts like them, or someone who attended the same college or belongs to the same social clubs. Unfortunately, when bias creeps into the workplace, it can result in distrust, poor morale, disengagement and high turnover.

Leaders, who want to build trust in their organization should make a conscious effort to identify any bias they may have and put checks and balances in place to assure their biases don’t negatively affect their decisions.  Once you are aware of your biases, just being mindful of them when making decisions can make a huge difference in being more objective.  Identifying your own bias can be a difficult task as we are often blind to our own tendencies, but rest assured, those who have worked alongside of you most likely have you pegged.  All you need to do is ask.